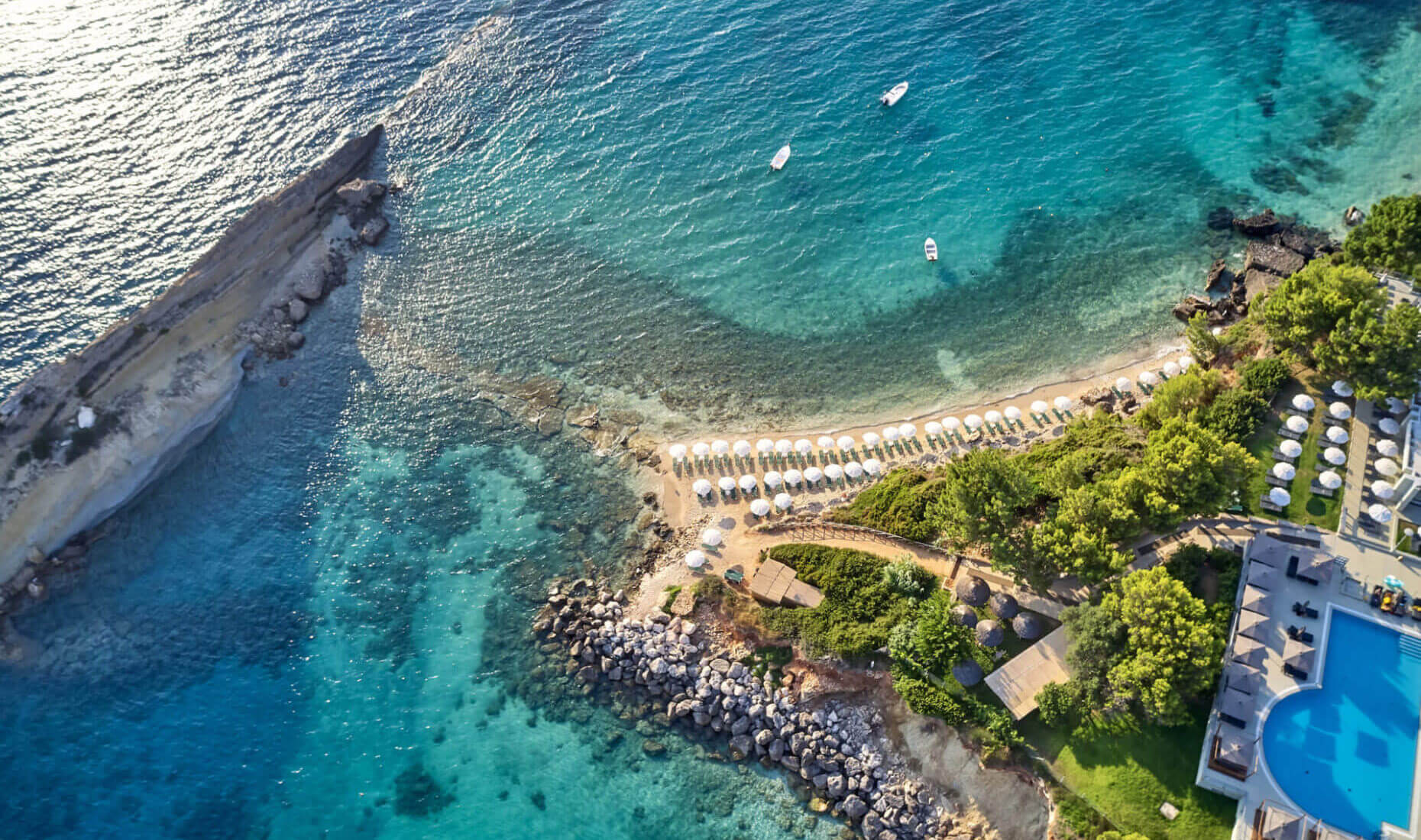 ARGOSTOLI The capital of Kefalonia stands on the far end of the natural bay surrounded by mountains and verdant forests. It is a picturesque town built on hills surrounding the lagoon of Koutavos which forms a natural harbor for caretta-caretta sea turtles, geese, cormorans and swans.

SAINT GEORGE CASTLE Built more than 800 years ago by the Venetians, “St George Kastro” was the  medieval capital of Kefalonia which hosted noblemen’s homes and everything needed to withstand a long siege. A fortress perimeter wall with several watch towers could spot pirate ships as far as 20 miles away on a clear day.

MYRTOS is the the beach where Hollywood’s film “Captain Corelli’s Mandolin” whas shot. Myrtos unrivaled deep blue waters embraced by white sand leading to dazzling white pebbles. It is a strip of theatrically long beach, it is an unforgettable beach, a beach to take your breath away, the attraction worth visiting in one’s lifetime.

ASSOS 15th century’s Castle built by the Venetian army, in order to protect the locals from pirate raids. Nowadays, there are only remains of the Castle’s fortification offering scenic sea views. Just below the Castle, lays the tiny and secluded village of Assos built amphitheatrically around a peninsula and surrounded, the village seems to be ‘lost in time’ and gives an almost mystical atmosphere with cypress trees, luscious green scenery, fishing boats moored in the crystal clear waters and colored houses with Ionian architecture nestled into the hillside.

FISCARDO Fishing village in north Kefalonia that has been transformed into a cosmopolitan harbor full of cruiser boats. Fortunately Fiskardo has managed to retain its traditional Kefalonia architecture. A stroll around the narrow alleys among the colorful houses will make you feel like a time traveler, rolling back a century. The traditional port promenade is a charming waterfront is vivid like a beehive during the summer months.

MELISSANI CAVE Surrounded by dense forest, Mellisani is a subterranean lake with beautiful turquoise waters, changing shades of blue, honey-like brown walls and countless stalactites that will take your breath away. You will be traveling to a mythical and magical world of the Greek mythological Nymphs and God Pan who according to the legend were the inhabitanst of the lake.

DROGARATI CAVE is a work of art, an astonishing marvel of spacious chambers adorned with stalagmites and stalactites, crafted over the course of 150 million years by nature, 37 meters below surface. The central cavern of the Drogarati Cave is known for its spectacular acoustics. The famous Greek soprano Maria Callas has performed in this spectacular hall as well as many famous opera singers. Inside the cavern the temperature is refreshingly lower than the surface to the delight of its summer visitors.

DE BOSSET BRIDGE is the largest stone bridge on sea water and it is located in Argostoli. It was constructed by the Swiss engineer Charles Philippe De Bosset in 1813. Today it is a national monument protected by Greek Ministry of Culture and a beautiful promenade extending along the Koutavos bay.

SAINT ANDREAS MUSUEM founded in 1639 by the wealth Greek-Romanian countess Roxanne, the Ecclesiastic Byzantine Museum of Kefalonia hosts a rare and large collection of spiritual treasures and icons brought to Kefalonia from Mount Athos.

KEFALOS THEATER was inaugurated in 1858  with the performance of La Traviata by Giuseppe Verdi. Located in the center  of Argostoli, it is estimated to be the largest and the oldest theater in Greece.

CORGIALENIOS LIBRARY is a beautiful old library which merged 1924 the donation of Marinos Corgialenios with the books of the public library of Kefallinia which had been in operation since 1887.

LOGGERHEAD TURTLES also known as Caretta-Caretta are the only marine turtles nesting in Greece and the Mediterranean. An adult Loggerhead grows to a length of 1.0-1.2 m, weights between 100-350 kg and can live for around 65 years. Females appear to nest mainly at night throughout the summer. The principal nesting site used to be Platis Gialos, Ratzakli and Ammes beaches. Today you can spot them at the Koutavos Lagoon in Argostoli, near the De Bosset Bridge and alongside the harbor where they are fed by the fishermen while they swim around the fishing boats.

MOUNT AENOS is the tallest mountain of Kefalonia, a National Park of unique splendor, providing shelter to rare endemic species of flora and fauna in a scenery of untamed beauty. It is the only National Park situated on an island and not in the mainland Greece and stretches over 3,000 hectares with its highest peak is Megas Soros reaching 1,628 m. Mount Aenos is the home of the unique fir called Abies Cephalonica that grows at altitudes of 600-1,600 metres and covers ⅔ of the park’s area. Hike among the lush vegetation in the deep green forest and be amazed by your encounter with the small Eqvus Caballus horses that live wild and free next to the slopes full of wild peonies.

ACQUI DIVISION MEMORIAL dedicated to the Italian 33rd Acqui Infantry Division massacred by the Nazi Germans in September 1943, following the Italian armistice during the Second World War. The massacre provided the historical background to the novel Captain Corelli’s Mandolin, which later became a Hollywood movie, entirely filmed in Kefalonia.